What is Core Data?

Core Data is an object-graph management system that also provides data persistence. It is not simply a persistence framework. Its features can be used without even persisting data. However, usually, it interfaces with a SQLite database (and this will be my assumption for most of this article).

What Core Data is Not

Below is a very basic example of a Core Data stack. Each component is briefly described below starting from the bottom of the stack. 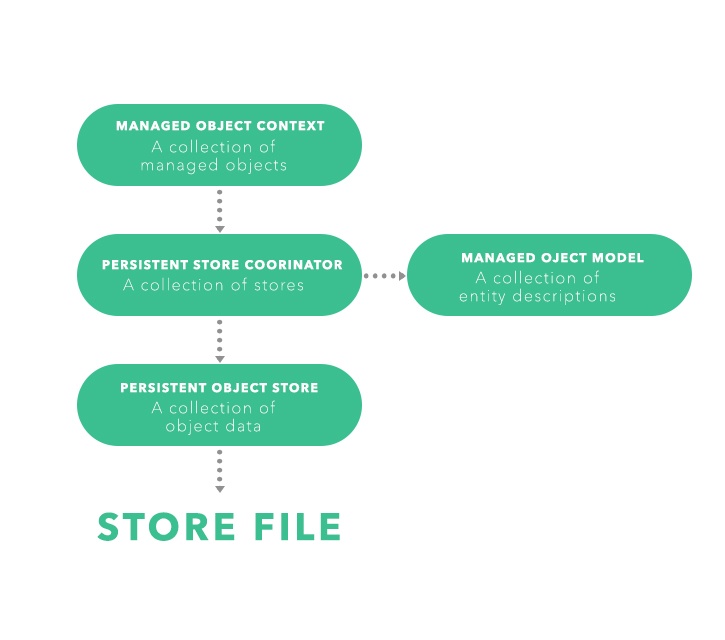 Designing the object model for your application is one of the most important steps in developing a quality application. If you spend some extra time designing your model, you will save yourself development time in the future. Your design can also have a large impact on the level of efficiency you are able to achieve. Unlike the more pure modeling principles used to design a database schema for a web service, your model design may partially reflect the needs of your UI in order to provide more efficient queries.

Below are screenshots taken from Xcode’s Data Model Design tool. The show a very basic model for a recipe application. An entity represents a table in your database. It is the blueprint for the NSManagedObject subclass instances that you will create and use throughout your application.

Attributes are properties of your object. They translate to a column in your database table and a property in your managed object. You can choose from a variety of primitive values that the database has to offer such as a string, integer, or date.

A relationship describes how one entity relates to another. Two important aspects of this are the cardinality and the deletion rule.

If you use the No Action rule, it is up to you to ensure that the consistency of the object graph is maintained. You are responsible for setting any inverse relationship to a meaningful value. This may be of benefit in a situation where you have a to-many relationship and there may be a large number of objects at the destination.

Working With Model Objects and MOCs

Take a Minute to Learn About the Apple Watch