Skip to content
Get In Touch
Let's Talk
Careers
Looking for a job opportunity?See open positions
Back
Culture
14 min read

Theory of Constraints: What to Change

Last week we introduced the Theory of Constraints. Every situation will always have a constraint that needs to be alleviated. There are three key questions that ToC can help you answer.

This post will look into answering the first question: what to change?

Assess the current reality of the situation. The following tools are used to identify the core problem or conflict and the assumptions that sustain it.

The Theory of Constraints assumes that there is no true conflict within a system. All conflicts are actually unexamined assumptions. The Evaporating Cloud is a tool which exposes this assumed conflict and attempts to resolve it by examining the underlying assumptions. In an Evaporating Cloud, a goal or objective has at least two requirements whose prerequisites are in conflict. 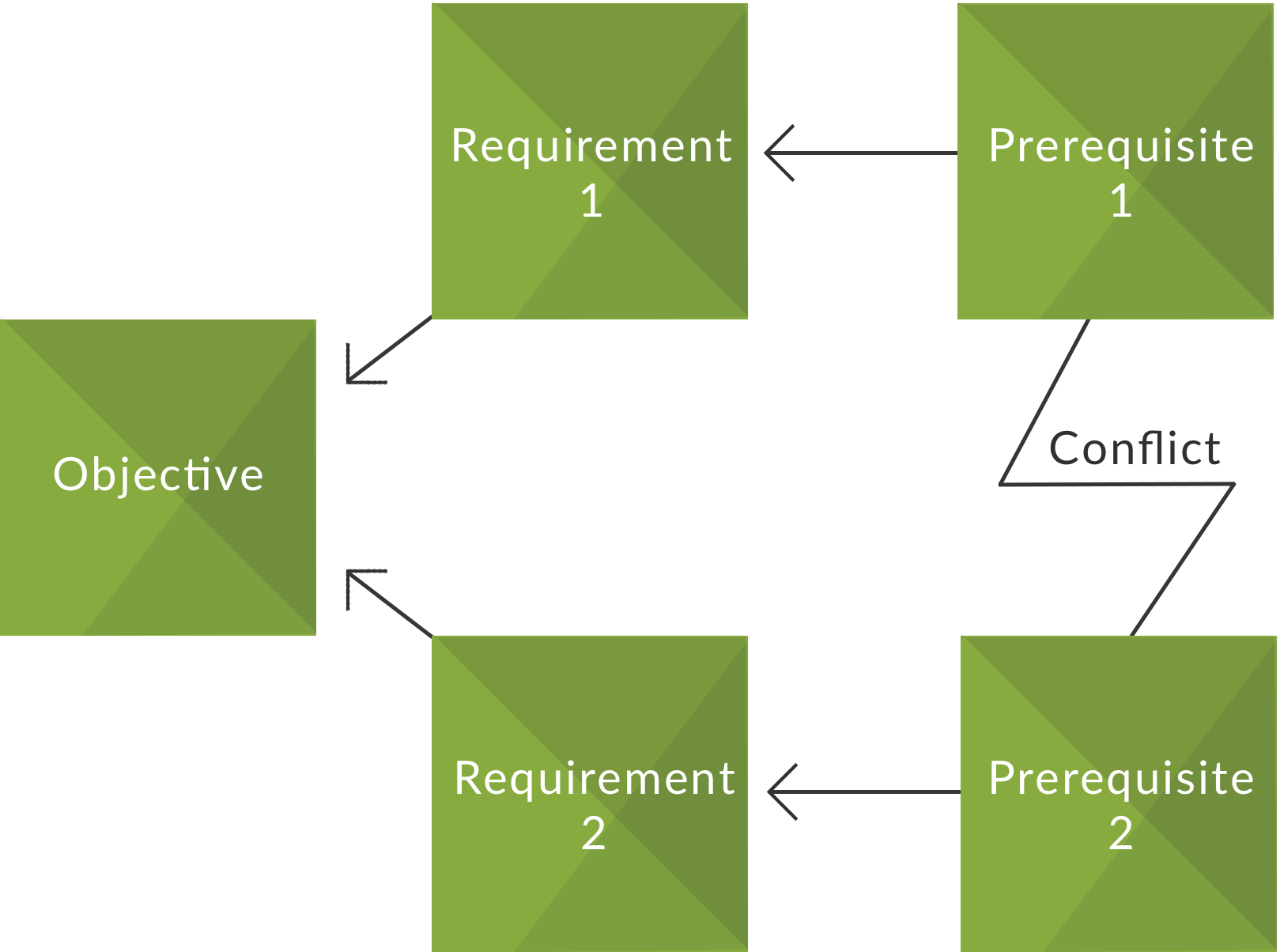 For example, if our objective is to quickly deliver software with minimal defects, it may be required that (1) quality assurance approves completed work before release and (2) developers deliver new features as quickly as possible. In order to have QA approve completed work before release, all work must go through QA before release. In order for developers to deliver new features as quickly as possible, however, they should continuously deploy software to users. 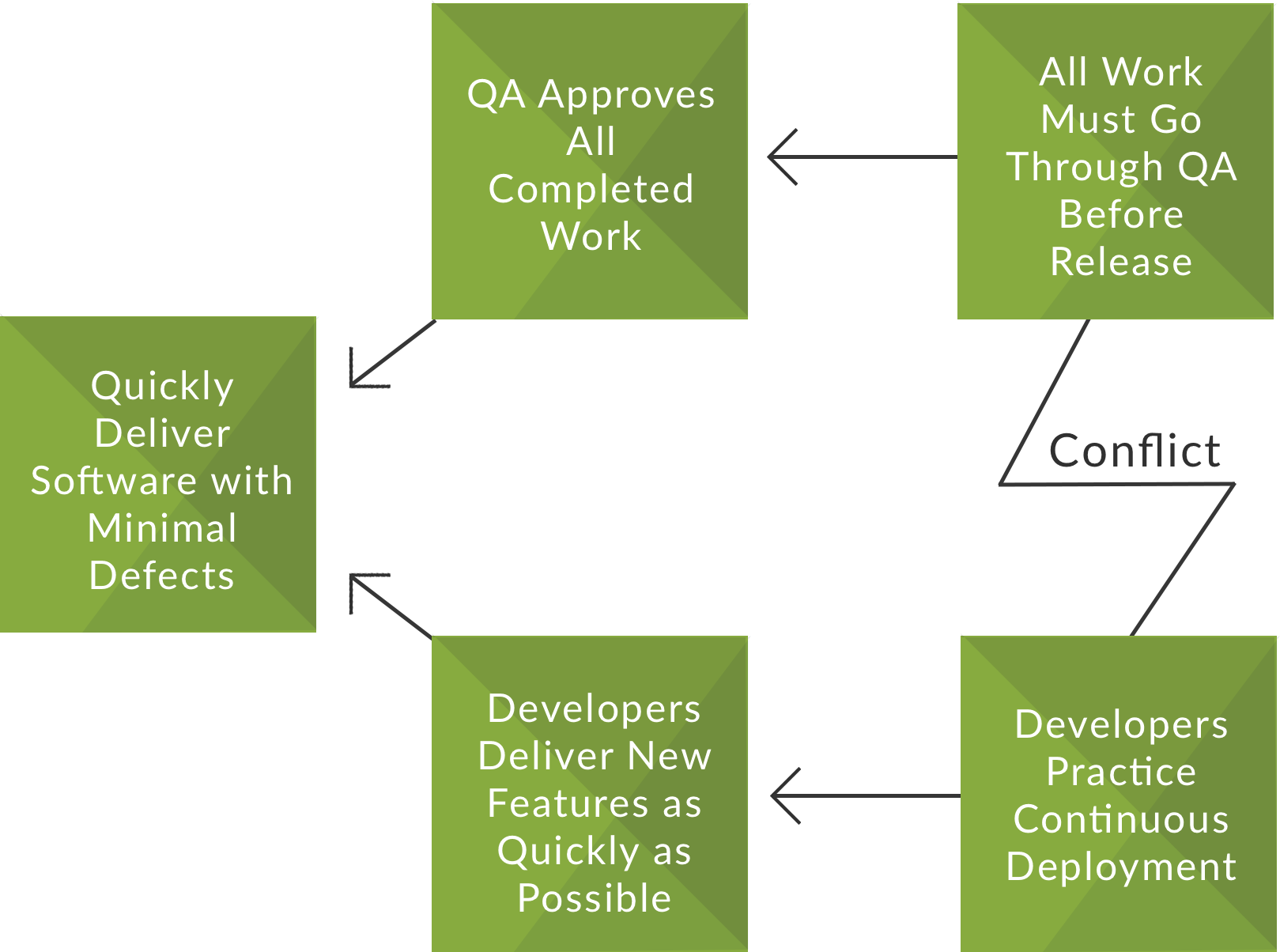 The above graphic is read as:

The conflict in this example is that we can not have all work go through QA before release and also have developers practice continuous deployment. This conflict, however, is due to at least one unexamined assumption. We believe we must have work go through QA before we deliver new features, creating a backlog of QA work and thereby forsaking speed of delivery for a minimization of defects.

For example, we may identify an assumption such as “QA is performed manually, which takes time,” or “due to unpredictable changes in software, every feature must be re-verified before any new feature is published.” Either of these assumptions can be proved invalid by introducing automated testing, removing the human time constraint on verifying all past completed work.

A Current Reality Tree describes the cause-and-effect relationship between undesirable effects. Tracing these relationships down to their causes should result in the discovery of a single root cause. 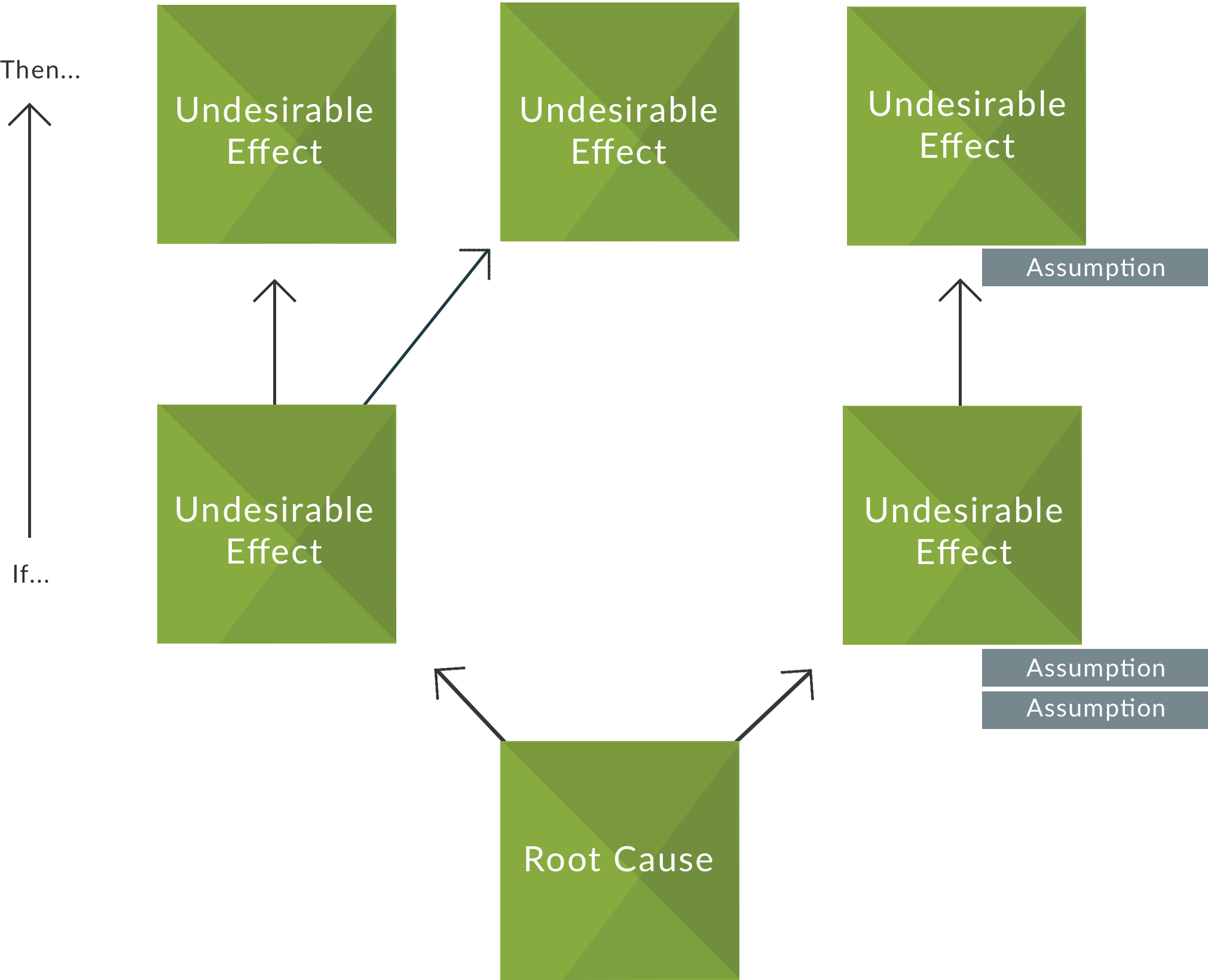 “If … then …” relationships are read from bottom to top. Additionally, you may add assumptions underneath undesirable effects. An assumption is a statement accepted to be true or certain to happen, without proof. Assumptions add a “because” clause to the if-then statement: “If … then … because …” 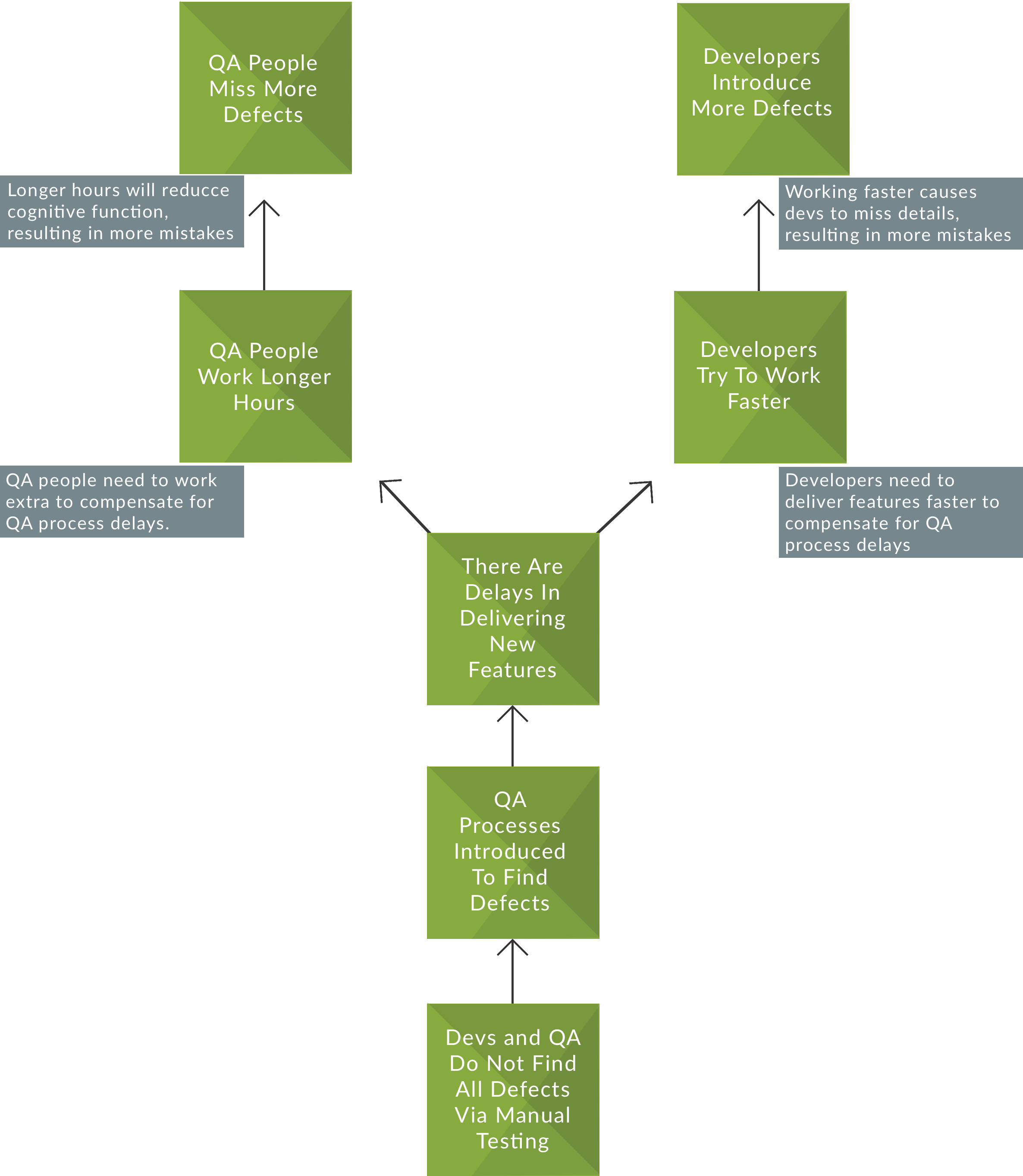 In the above example, the identified root cause — the lowest-level cause from which all other undesirable effects originate — is that developers and QA do not find all defects via manual testing. The above can be read as:

Want to improve your situation? Use a #CurrentRealityTree to find the root cause #MetovaToC [Source: @Metova]  (Click to Tweet!)

The above Current Reality Tree adequately outlines the cause-and-effect relationship between the system’s undesirable effects in our current reality. Due to this cause-and-effect relationship, you can determine that we will continue to see these undesirable effects so long as the root cause remains in effect. So long as we fail to find defects, we will have unhappy developers and unhappy QA people.

The Current Reality Tree can be transformed into a Future Reality Tree by injecting new proposed actions, policies, and behaviors.

Taiichi Ohno devised the Toyota Production System based upon a simple practice: asking “why” enough times to dig down into the underlying root cause of a problem. Known as the Five Whys, you can begin identifying a constraint in the system by asking why an undesirable effect exists.

Continuing with our previous example of quickly delivering software with minimal defects, one might start with an undesirable effect such as QA people follow a strict QA process that takes a long time. Why do they follow this slow process? QA has failed to identify defects in the past, so it makes sense to institute a process that identifies concrete functional requirements and requires verification from a QA person. This takes more time, however, so QA people have to work more to compensate for a heavy process. This extra work results in decreased cognitive function for overworked QA people, which in turn causes QA people to miss more defects.

There may be an even deeper cause than has been identified in this example, or perhaps this string of decisions was made with underlying assumptions which can be proven false. The key takeaway is that simply asking the question “why?” can allow you to gain a deeper understanding of problems in the system.

Also recognize that you may have answered any one of the above “why?” questions completely differently than what is written here. You may have even jumped to deeper conclusions with more or fewer questions. Ask “why?” as many times as needed to satisfy your curiosity and identify a root problem.